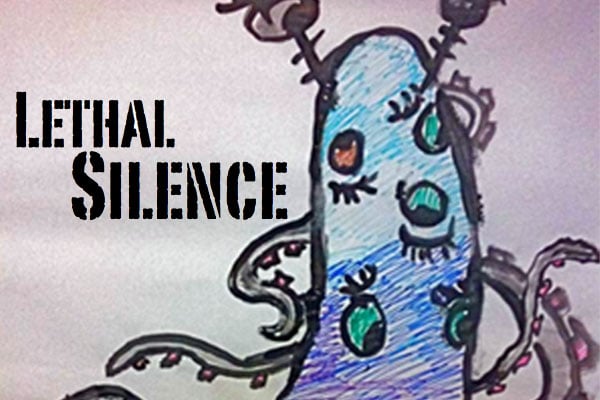 Dolly came with her class to a writing workshop in July 2011. The class wrote the beginning of Lethal Silence together (in italics below), then finished it on their own.

As the spaceship hurtled towards earth, Gordon let out a terrifying scream. He was about to land in Santa’s workshop. He thought of life back on his home planet, Mars, where he had an endless supply of space candy and life was good.
Gordon was a slug-like Martian with seven eyes and sunglasses. His irises and body could change colour whenever he liked. He was sent from Mars to brainwash the innocent things who live on earth. Gordon got out of the spaceship and saw lots of elves. He thought they were leprechauns and had already been brainwashed.

But deep down, all Bob wanted was space candy and where Gordon came from there was plenty. Bob stepped out of his ball of fire, stretched out his magnificent milk-white wings and puffed out his chest proudly.

‘Ooooooh,’ the elves squeaked in unison. They had never seen anything like it.

‘Hey Gordon, give over will you? What have these creatures done to deserve this?’ Bob shouted.

Gordon looked flustered. Who did that martian think he was? McSlime the Mayor of Martian town?

‘Who do you think you are, alien?’ Gordon said rudely,

‘Why would you brainwash creatures that are of a lower rank than you? Creatures whose magic is nothing compared to yours. What you’re doing is pathetic and low and I had thought your people would be noble and brave but now I see the truth. You are cowards. Fight a worthy opponent,’ Bob said angrily.

Gordon looked unsure. What if Bob was right? What if what he was doing was pathetic? But no! Gordon couldn’t let another Martian stamp on his pride and dignity. He had to go on. After all, power only comes to those who strive to achieve it.

‘No, power only comes to those who deserve it’, Bob said wisely. It was the first time he’d sounded so serious about anything.

Gordon looked taken aback. Realisation dawned upon him. Bob was a mind reader, one of the rarest species of Martians. As Gordon’s species also had the power to brainwash, the powers clashed together. Mind-reading meant mind control but brainwashing also meant mind control. It was a complicated situation. If they fought with their powers, both lives could be at danger.

Magic like this was dark, powerful and lethal. But not in all of Martian history had two Martians with the same type of magic fought together. Nobody knew what would happen. Most believed that both Martians will be stripped of their powers but every time Gordon thought about it, he kept wondering if he cast his spell powerfully enough, only Bob would lose his magic and Gordon himself would be enhanced with Bob’s magic. He would be the most powerful Martian in the whole universe!

Suddenly Gordon became wary. Of course Bob would know of these thoughts since he could mind read. He had to act fast. Gordon lashed out his tentacles, making their way to cover Bob’s head. Gordon had been fast, but not fast enough.

Bob wrapped his wings around his body, making a shield. He worked his way through Gordon’s mind and started to alter it. But he couldn’t get through the barrier. His wing shield was becoming weaker and weaker and Gordon’s tentacles were closer to finding their target. Using all the energy he had left, Bob thrust his wings out, his mind concentrated on breaking the mind barrier. Light clashed together like thunder and both Martians were flung off their feet. They collapsed in a heap.

A lethal silence hung desperately in the air.

And then a cheering broke out. The elves jumped and squeaked and Santa shouted, Oh marvellous, marvellous performance!’

Of course, he had no idea that it was a fight, not a show. The two devastated Martians were sent back to Mars, both receiving severe punishments. Bob was banned from space candy for a million years and Gordon was confined to his hectare of land with no powers for a million years as well.

Folks, there’s a lesson to be learnt from this story. If you ever meet a Martian or a creature from a distant planet, don’t underestimate their skills. But don’t overestimate them either. Just pretty much don’t estimate them at all!

About the Author – Dolly Li

In her own words: “Hi my name is Dolly Li and I go to Alexandria Park Community School. I live in a family of four and I have loads of talented friends. I like reading books with a bit of action and mystery but I also read fantasy. Although I enjoy writing, I want to grow up to be a photographer or a film-maker. During my spare time I like to read a book, watch a movie or spend time with my family and friends.”

Dolly’s story was published in I Met a Martian and Other Stories, the Sydney Story Factory’s first official anthology.