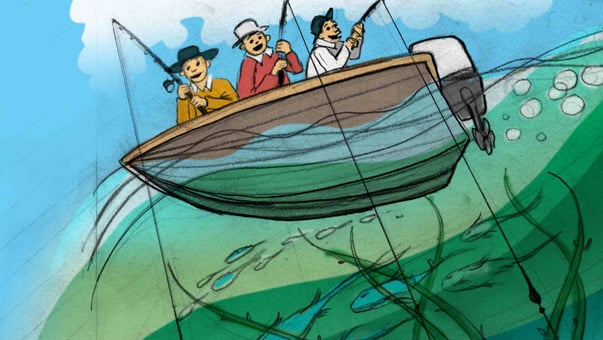 It was a sunny day in April and I was only three years old, and I was a fast runner. My dad who works hard building stuff decided to take a day off and take the family fishing. We had  a silver BMW, It went fast. We drove to Bondi Beach where lots of people were sunbaking and making sandcastles. They were digging up the sand to find treasure. My dad borrowed his friend’s boat. It was a white motor boat that went fast. Then we climbed in the boat. The boat bumped over the waves. So we got soaking wet and it made me feel sick. I vomited. After a while dad turned off the motor. It was the first time I ever went fishing. I felt better now. In fact I was feeling extremely happy. And suddenly dad caught a fish and I cheered and cheered and said “yah yah yah yah” as well as hugging my dad. I said “I want to catch another fish”. But dad said “No we need to go home”. I had said back to dad” then can I have an ice cream” and dad replied” We have lots have of ice cream at home”. I had said “Ok”

Then Dad saw a woman while we were going home. They got married and we went home and ate the fish with rice salad and chicken.

After we ate the fish, I got to eat dessert and do you know what that dessert was, it was ICE CREAM! While I was eating the ice cream I got a brain freeze.

That was the end of my story. Fishing Tale was written by Matthew Clark Rivera, who turned 6 on April 16, 2012. He says of himself: When I grow up I want to be a footy coach and I’m going to play in union and my team is Rovers, and I’ll drive my very own BMW going to the football stadium. My dream place is Disneyland. My favourite computer game is Moshi Monsters. And I play Lego too.