Story Factory | student writing | THE WEIRD ALIEN WHO CAME TO…. 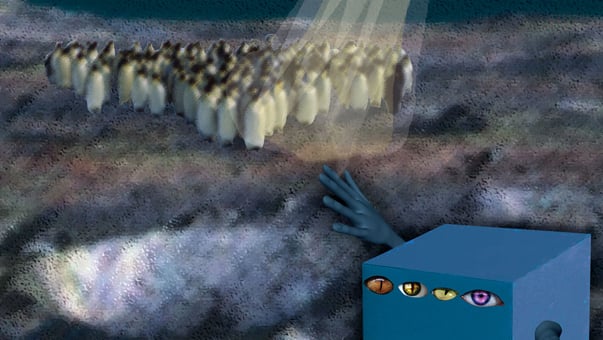 THE WEIRD ALIEN WHO CAME TO….

Our heroine is Amelia Sonico. One night while Amelia slept in Mount Carmel School a martian came and flew through the window and landed behind her bed.

‘H-h-hello. What is your name?’ said Amelia.

‘I am martian Number 9 and I need all the penguins in Mount Carmel school to be my slaves on planet Mars. BRING THEM TO ME!’

Amelia thought for a while. Then she said, ‘Okay, I will give them to you next December. Come back then.’

Amelia decided to quickly hide all the penguins in her cupboard. The penguins felt nice and warm. Amelia and the penguins waited and waited. They waited for twelve months until next December came and Number 9 came back. He came back on the 25th at 5 o’clock.

‘AMELIA! WHERE ARE MY PENGUIN SLAVES?’ he shouted.

Number 9 was not happy. ‘Whatever! I don’t believe you and your rubbish. I will look for them myself!’

The teachers were in the library sorting books. They could hear Number 9 in the playground.

‘What is that voice? That’s not one of the kids’ voices!’

The teachers looked out the window and could see Amelia talking to a green, slimy, dirty alien with red eyes and three toes like a frog.

‘What shall we do?’ said the teachers.

‘We must have a big battle. Let’s go and tell him we are going to fight him,’ said one of the teachers, Mr Bubbly.

Mr Bubbly told Number 9 they were going to fight him.

The other teachers ran back to the library.

‘Let’s get some things to battle with! Let’s get huge books, tables, chairs, computers and big boxes,’ they said.

Meanwhile Amelia went to feed the penguins to keep them calm. The teachers ran back to the green grass and they started

to battle the martian with their weapons. There were too many teachers and huge books and tables and chairs and

computers and big boxes for him to fight.

Number 9 was defeated. He decided it was time to go home. He clicked his fingers two times, clapped his hands five times and jumped in the air nine times. Then he magically disappeared home to Mars.

The teachers of Mount Carmel were very happy. Everyone was so happy they decided to have a disco. A Donut Disco!

About the Author – Jade Dharma

In her own words: “Jade Dharma is an 8-year-old student at Our Lady of Mount Carmel School. She is good at spelling and she likes to paint, ride her bicycle and go shopping. In fact there are so many things she likes to do she can’t fit them all on this page. She has a little brother and two pet chickens. Pet chickens make a lot of noise, like a living alarm clock. Her favourite colours are pink, black and green and her wish for the world is that aliens never destroy our planet.”

Jade wrote a story about a Martian coming to Earth at the Sydney Story Factory’s first pilot program in 2011.