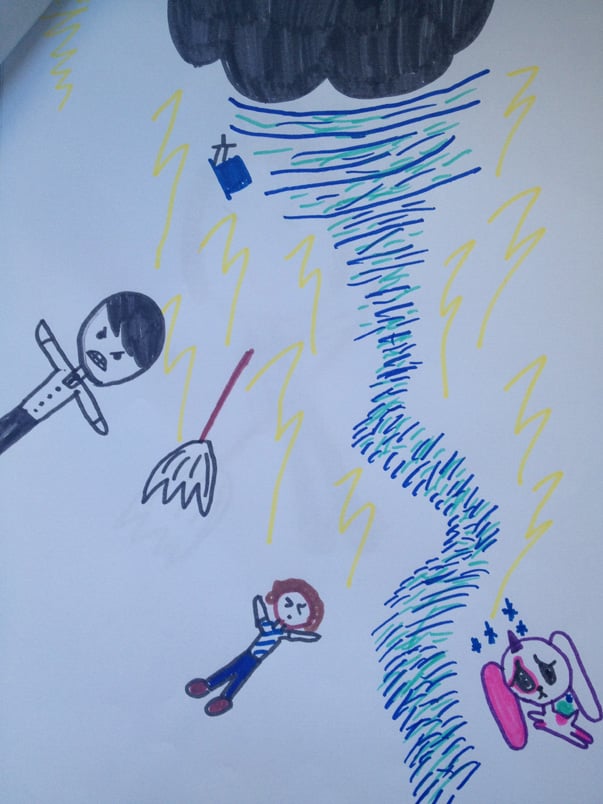 Mr Dark made a long, long announcement. Tom, the thirteen year old cleaner, walked around the dusty school with his eyes closed so he couldn’t see the dirt. He hated dirt so much. But not as much as he hated his father, Mr Dark.

Suddenly a vortex of lightening and dark clouds came and sucked them up. In the storm Tom saw his pet uni-peg-dog Kook. Soon they landed on a sharp rock desert. It was very sunny.

Mr Dark screamed, “Sunlight! Get it away from me!”

Kook flew up into the air with his wings and used his horn to block the sun.

But Tom didn’t have time to answer because a rock band of pirates had arrived. They had dreadlocks and eye patches.

They saw Tom, Kook and Mr Dark and said, “If one of you can entertain us you may live.”

Tom got his broom. He started to shake his hand around it because he thought it was a guitar. Then he started to sing badly,“Oh dude! I love to play my guitar! And I’m a cool, cool man! My dad, Mr Dark is the worst! Oops! I wasn’t supposed to say that! Oh no! My guitar is broken! But guess what it’s still good for whacking pirates!” Tom got his broom and whacked the pirates.

“How dare you!” they screamed. “You will go in the pit of metal eating Aliens! We should never have asked them for company.”

“So you bought us here!” said Tom.

“No, the Aliens did, after we asked them.” Fifteen minutes later the pirates dumped them in the pit of Aliens! They all ate metal. The black pit was so sharp Tom had to keep hopping from foot to foot even though he was wearing shoes.  There was a scream of agony. Mr Dark had had his heart eaten out! He was so mean that it was made of metal.

“Hey!” said a deep growling voice. It was the Alien. “Your dad was easy to take down! I’m expecting much better from you! If you beat me I will try to use my evil magic to grant you one wish.”

“Sure!”, yelled Tom as he rushed towards the Alien. His eyes had     adjusted to the dark and he could see the Alien. It was shaped like a toad. It had blue spots with pink skin. It had one fat human foot. Tom grabbed his secret dagger that he kept in his hat for emergencies. Everyone thought it was a feather. The toad alien moved and whacked Tom. His dagger slipped and it flew in the air. It hit the pink toad Alien in its weak point – his human foot.

“I want to play guitar in a rock band.” said Tom.

“Very well, I will try to grant you your wish.” The toad cried then died.

“When you went crashing to the floor after the toad face whacked you, you landed on top of me and it hurt my wings,” said Kook.

It was Mr Dark.

“Make sure when I’m gone that crazy dog is murdered.”

“Great!” exclaimed Tom. “C’mon Kook! Let’s go home and get a guinea pig! We can call him Omonon! He’ll be so cutie wutie! I need him to play piano in my rock band!” Tom and Kook stepped in to the vortex and Kook chanted Omonon! Omonon! Omonon! They went home leaving Mr Dark to die in the lonely, big, black graveyard hole. Lots of people die there. But Tom was already at a pet store buying a pet guinea pig to play piano.

Ella Rose Sullivan was born on November the 5th 2002. She is the oldest of 3 children and has an adorable Guinea-pig called Flash Dash. Ella lives in Redfern and is a fabulous climber. Ella wants to be a writer, vet and compete in Archery at the Olympics. Ella Rose Sullivan is good at writing scary adventure stories.