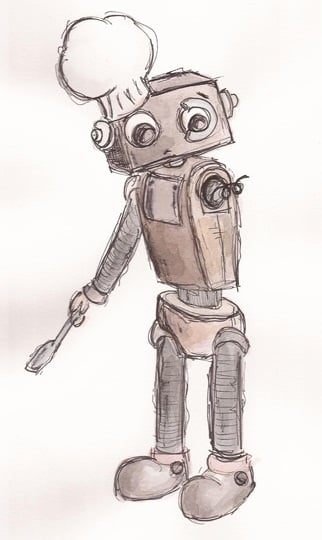 Once there was a 9 year old girl called Amelie. She was on her way to primary school at Bondi Beach. She had a purple eye on the index finger of her right hand. Suddenly a tidal wave swept over her. She was stranded in the ocean with no land in sight. With the weird eye on the end of her finger she saw a ship on the horizon while she was swimming. It was a pirate ship with ripped red sails. A pirate ship with the world’s best chef who was also a very clever robot. Mark, the chef, took his robotic arm off like a band aid to save her. He was hoping his arm would float to her. It didn’t work because it had deprogrammed.

Mark saw a problem which needed to be solved. He decided to pretend that he was cooking a lamb roast, so that he had a force field to protect him from the water, which would deprogram him entirely.

He imagined he went down to the basement, went to the gas fridge, got the leg of lamb, put it in a baking dish and added rosemary and salt. While the lamb was cooking, with his force field to protect him he climbed over the side of the ship and untied the ramp. He slid down the ramp into the water.

On the way to rescue the girl Mark pulled his robotic arm out of the water and said, “Hold on, hold on to this arm. I’ll pull you along”

Mark pulled her back to the pirate ship and she was saved.

Amelie was shocked to see the pirates. Mark said, “Don’t worry. I have a plan. I’m hopefully still the world’s best chef. I’m cooking a special meal of roast lamb, roast potato, sweet potato, asparagus and gravy. The pirates are going to love it.”

It took him four hours to cook his famous meal.

The mean pirate captain Frederico said, “That was the worst meal I’ve ever tasted!”

But really he was hoping for more. Amelie chimed in, she said it was the best meal that she’d ever tasted. Then all the pirates said it would be their favourite meal from then on. Mark was flabbergasted and very happy. He had his arm back and he still remained the best chef in the world.

Amelie was escorted back to Bondi with Mark. Hopefully she wasn’t late for school.

I go to Darlington P.S. My name is Matilda Rose Cooper Ayres. My age is 9 years. I have one brother called D’Arcy. He is six. I like books, food, the park, andswimming. I would like to a kindy teacher. I have a dog called Clancy.