Story Factory | Latest News | The #BLM Protests Are Not Your Aesthetic 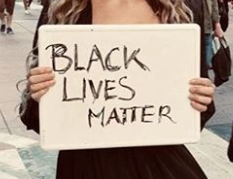 The #BLM Protests Are Not Your Aesthetic

We asked Nickie, a Year 10 student in our Year of the Novella program, to write an original opinion piece on the Black Lives Matter movement and its implications for her generation.

I saw a video on Instagram of a woman pretending like she was helping a worker board up a window. Drill in hand and bandana wrapped around her face, she struck a pose. Her friend stood in front, camera ready, to snap a photo for the ‘gram. Then they drove away.

Ah, social media — our greatest ally during these dark times of police brutality, racism, riots, and chaos. Simultaneously (and unfortunately) it also provides an outlet for opportunists like Instagram Influencers to boost their social media’s presence. I’ll say it once and I’ll say it again: the #BlackLivesMatter protests in the US right now are not a prop for your glamorous photoshoot. It’s not an aesthetic you can ride on to show that you care. People are dying, and it’s disrespectful to use that opportunity to post hot pics disguised as activism.

Influencer culture on social media, namely Instagram, motivates toxic and pretentious behaviour. Influencers strive for the most likes, followers, and “clout”. So during the protests, when online activism is so highly encouraged, certain influencers will use it to gain fame. The Instagram model and influencer, Kris Schatzel, was caught on camera posing and taking pictures at protests before walking away. She argued that it was her way of spreading awareness. However, using protesters who are risking their lives for change as a backdrop is insensitive and superficial. It is not an engaging or immersive form of activism. Staying on the sidelines and using a singular post as the bare minimum does not create real change. It is only signalling to their audience that they are doing something, even if it’s not enough.

By glamourising and glorifying activism for an online aesthetic, it’s trivialising the real and significant issue at hand. A video was seen on TikTok was made by a boy who purposely tried to get arrested by the police to gain sympathy from his audience. He smiled, laughed and posed for the camera while being led by the police, taking shirtless photos and captioned it all as: “made into a criminal for breaking silence.” Of course, this reeks of white privilege, he did it knowing he’ll go home unscathed. He mocked it, he knew he won’t be punished as severely as if a black person did it. He twisted a devastating issue of oppression and racism into some trendy “bad boy” aesthetic. This tactic of performative activism is a hindrance to real progress.

Influencers should use their platform to amplify black voices, educate their followers, and inform them on practical solutions that actually lead to change. The #BLM protests need to stop being treated like a fashionable trend. The movement is more than just a hashtag. It’s more than just a black screen. And it’s certainly so much more than just a cute selfie in front of walking protesters.