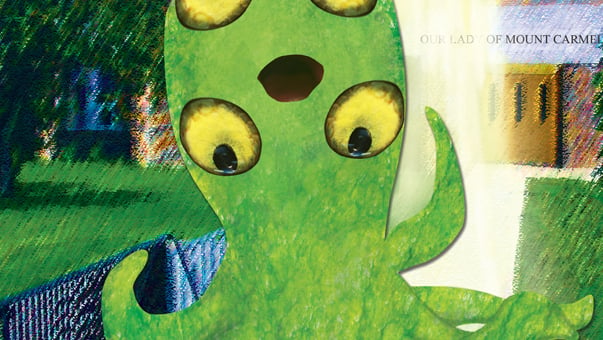 Once upon a time there was an Alien from Mars. His name was Gloopy Jelly Ambassador. He travelled around the galaxy giving earthlings and others the opportunity to come to Mars to holiday and also to talk to Martians. This was very important because there are not enough Martians, and they will go stupid if they don’t speak to others.

When Gloopy tried to come to Earth on his ship, it ran out of fuel and crashed landed, but no-one noticed, as the material of the spaceship was light. The spaceship landed near the hill next to the Our Lady of Mount Carmel (OLMC). Gloopy comes out of the spaceship but it is sunny and he finds it hot.

The school is quiet as some of the infant’s classes are on an excursion, and everyone else is doing exams in the classroom. Gloopy sees a large tree in the school and thinks it’s a building where earthlings live. He walks and starts banging on the tree. The Kid comes out of the toilet, sees Gloopy, is too scared to scream and runs to his class.

Kid: There is crazy monster outside banging on a tree!

Teacher: Sit down. Your lies are too unbelievable.

Teacher: Stand in the corner and face the wall, and no more talking.

The Kid is really angry and runs downstairs. The teacher runs after him. The class downstairs hear the noise and look outside and see Gloopy. They get very excited and tell their replacement teacher, who tells them to be quiet and sit down. Some of the kids run out of the last classroom to tell the teacher who isn’t there as he is chasing after the kid. All the school is now standing around the tree and Gloopy. He has 4 huge eyes, 2 on the top and 2 on his cheeks. He has eight legs and arms that are green gooey, like jelly, and he smells like plastic. The Kid runs out in front of the school kids and Gloopy, and as the teachers comes around the corner, he sees Gloopy and faints.

He has an evil laugh, and shakes his a hands above his head. ‘Hhhuu hhhuu hhhhhuuuuuu!’

The kids go closer to Gloopy. He surprised since the kids are not in the tree. He talks. ‘Hello Earthlings, my name is Gloopy Jelly ambassador. I am from Mars Jelly underwater world, I come in peace. I am here because I am going to tell you Earthlings that you can come to Mars, to have fun and be in zero gravity, and we have some hovering bumper cars and much, much more.’

The Kid and some friends are excited and start running home to tell their parents. They see Jupiter with the machine coming to school. The Kid’s friends run away, but the kid sees Jupiter laughing and turning on the machine.

He goes for the machine, and gets electrocuted.

The magic lightning turns the kid into LEGOMAN. He has special powers, electric shocks through his hands. He fires his hands at Jupiter.

Jupiter screams, ‘BLLUUHHHHH BBBLLLUUU’ and turns into his normal ugly, smelly, small form. Jupiter and the machine vanish, and LEGOMAN turns back into the kid. He cheers. Now he sees all the other children coming from school.

The kids all run home, and tell their parents that they want to always go to holiday on Mars. The parents agree, and all the kids have fun visiting Mars every year, and the Martians grow smarter as they talk to kids every year and live happily ever after.

In his own words: “Tom is 8 years old. He enjoys living in Redfern and likes to play games with his friends at school. He is the mathematician in his class and when he is relaxing he likes to eat treats, watch TV and write stories.”

Tom wrote a story about a Martian coming to Earth at the Sydney Story Factory’s first pilot program in 2011.

His story was published in I Met a Martian and Other Stories, the Sydney Story Factory’s first official anthology.